Well kids, today is my Bermuda-versary! To clarify, in case you’re not sure what that made-up word means, I moved here as a resident one year ago today.

I spent most of August in the Midwest and it was so good to be home for so long. I thought the visit would have a more relaxed pace than it did (hence the lack of blogging this month—sorry!), but as it turns out, there are still a lot of errands I need to run and people I need to see in Wisconsin. Reflecting on the trip, I just feel grateful to have friends that I miss so dearly when I’m here, and yet when we’re together, despite not having seen each other for 8 months in some cases, it feels just as comfortable and close as ever.

I’m also so grateful for the perspective of moving away to make me realize how wonderful all the places I call home really are. I know wonderful sounds like an exaggeration, but really—simple things like the sun shining on a cornfield in the early morning, the quaintness and safety of little old Milton, the down-in-your-bones goodness of locally grown food just took my breath away at times. 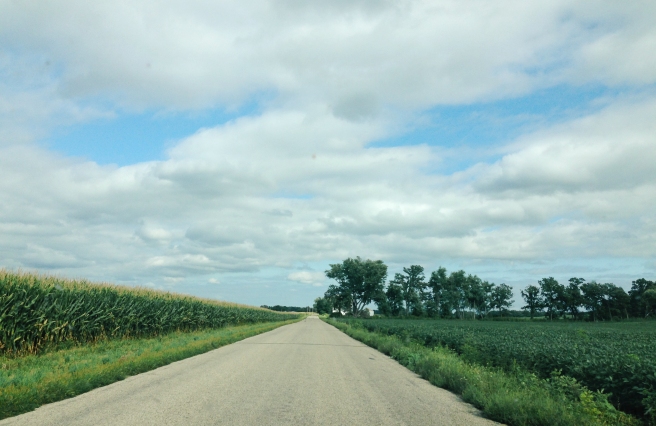 But back to the point—this post is supposed to be about Bermuda, remember? It’s been an interesting year. Quite honestly, if you had asked me six months ago how I liked Bermuda, I would have either lied to you and said “fine,” or if you were really lucky, I would have told you that I hate the monotony of doing the same things with the same people week in and week out, and the weather is shit, and have you ever had a scooter as your only means of transportation when it’s 50 degrees and rainy every damn day? And also, it’s hard to meet new people when you work from home, and relying too much on your significant other for human interaction puts a huge strain on your relationship and I will most likely never get a full time job or be able to realize my dream of opening my own business while we’re here.

To sum up, it was hard at first. Even in an “island paradise” it was hard. One of the things that helped me through that period was finding people who had gone through the same thing; just finding out that I wasn’t alone in my feelings. So, if you’re in the dark part of the big overhaul, I hope this makes you feel less alone, less like something is wrong with you. It’s hard. That’s ok to admit. And if my ranting doesn’t help, maybe these other tips will:

Don’t leave your passion behind. As you may have guessed, shipping a 400-pound antique printing press and all the accouterments is not the most practical thing in the world. For me, it was easier to justify because it brings in income, but mostly I knew I would be sad if I wasn’t able to print. Seek out the things that make you happy. In Bermuda, not too many businesses believe having a website is important. I had to own my nerdy passions and ask around. Another expat who I never thought would be into sewing told me about the basement of a local department store where they have bolts of fabric, notions and an awesome yarn selection. I found the island’s only proper art store by happenstance—I drove by and saw a little mall area I’d never explored, so I went in. It’s an adjustment (from an American point of view) not to have everything you want conveniently available, so you’ll have to explore. It’s worth it.

Put yourself out there. I know, so cliche, right? I’m pretty introverted. I don’t usually love meeting new people. I hate being in circumstances I can’t predict, especially if I don’t know anyone there. Seven years of art directing photo shoots has made me better at small talk, but there are definitely still times that I run out of things to say and questions to ask. Andrew has some great friends who have welcomed me with open arms, but I knew it would be important for me to have my own tribe as well.

I’m not sporty, and there aren’t a lot of other organizations to be found—I looked for book clubs, etc. but found nothing. But, because it’s such a transient community, most people are really friendly. About a month after I moved, I accepted an invitation from another ex-pat I had met only once or twice to be on her mini-golf team for a fundraiser. It was so out of character for me, but the event sounded fun and since it’s Bermuda, everyone would be pretty boozed up—how bad could it be? I’m still so grateful I went out on a limb on that day—that team ended up being the foundation of my own friend group here and it wasn’t hard—when you find your people, small talk becomes less small and a lot less painful (for me anyway!). Another expat who has recently joined our group struck up a conversation in the airport over nail polish. Put yourself out there, people, it’s so worth it!

Don’t keep it all in. One of my biggest regrets while going through my divorce was that I didn’t talk to anyone about how bad things were until after I had already decided to leave. Do I think the relationship would have worked out? Uh, no. But I probably could have gone about things in a much healthier way.

This time around I’m lucky to have a very good friend who had been in a similar situation—new country, no job, husband works—just a few years ago. I could dump all my emotions on her because she understood—no judgement, no telling me how living here was supposed to be awesome all the time. Nothing is awesome all the time. I’m also really lucky that my partner is a good listener, will hold me while I cry, and even when he doesn’t understand it, even when he’s the source of my displeasure, doesn’t tell me I’m wrong for feeling how I do. I know how lucky I am to have these people in my life.

Recently, I woman I had just met dumped all her big-life-change emotions on me, and I was happy to help talk her through it. You need people like that in your life—even if you just met! And if you don’t, you can write to me. No judgement here, my friends.

Stay in touch. One of my dearest friends moved halfway across the country about five years ago. We really lost touch for the first year or two—we’d send emails and snail mail, but one of us would always get busy and we’d lose touch for months at a time. Then we started setting up Skype dates. We treated them just as you would meeting a friend for dinner (sometimes we actually ate dinner too!)—sign on at a certain time, make sure you have at least an hour to devote to the other person, don’t flake out. I’m not sure if I would be as good at keeping in touch with family and friends back home if I didn’t have that experience. Text messages etc., can only do so much—sometimes you just need to see someone’s face!

Cut yourself some slack. It’s not easy adjusting to a new country, a new lifestyle, new food, new places, new people, etc., etc. I don’t think I realized how stressful things like never knowing where I was going, not being great at driving a scooter, and meeting new people every day were until those experiences eased up. Some stresses I was able to simply change or remove from my life—definitely recommended—and some I just had to practice or get used to so they weren’t stressful anymore. Treat yourself gently. Eliminate negative self-talk. Be physically active—it really does dissipate a certain amount of stress.

Are you tired of reading my advice yet? Good, I think I’m just about out of wisdom for one year. Goodbye from beautiful Bermuda! 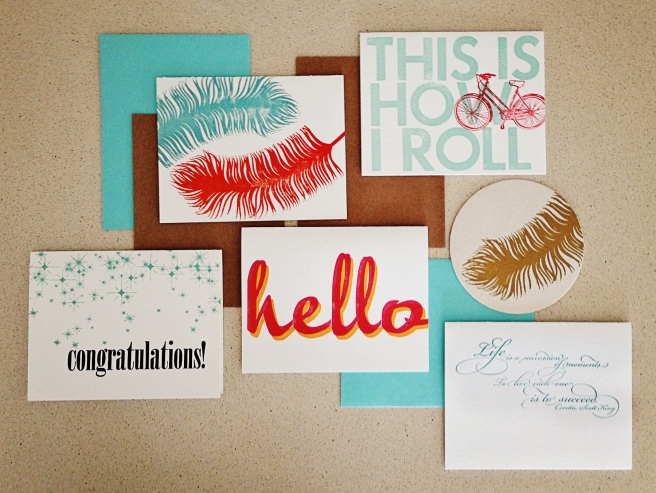 I sent August’s Card Club subscription early to make sure it left Bermuda before Cup Match week since the whole island is in vacation mode well before the actual holiday.

There was no real theme this month aside from pulling cards in my favorite late summer colors of turquoise, poppy red, oranges and gold. This lucky subscriber also received the very last “Life is a series of moments” card in stock, and the very first sparkle “congratulations” card in this color scheme. Lucky her!

As always, to get in on the action, simply shoot me an email or purchase a subscription here. The next installment will be packed up early as well, so sign up today!