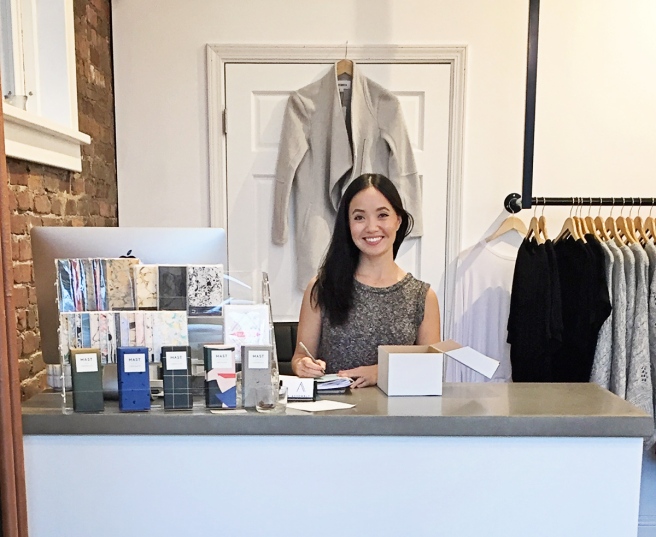 It’s been a few months since I added a new store to my stockists, but I’m feeling like it was worth the wait! Assembly in Stevens Point, Wis. is owned and operated by Quyen—that’s her smiling mug above—a recent Twin Cities transplant with superb taste.

Assembly offers quality, modern and fairly minimalist clothing, accessories and gifts in the heart of downtown Stevens Point. The space feels like it belongs in a bigger city, with its high ceilings, exposed brick and seriously fashionable wares, but this gem of a shop is flourishing in a town of less than 30,000.

I was “up North” (as we Wisconsinites say) anyway while I was home, so I took the opportunity to deliver her goods in person. I haven’t visited my alma mater in quite a few  years, so it was almost eerie driving along streets I used to know so well, past places where I used to work and houses where I once lived.

There’s something really poignant about having my work for sale in the place where I first learned about letterpress. Despite being a fairly small order, it feels significant somehow, like here’s the signal that I’ve finally “made it”… whatever that means.

Quyen, in keeping with her minimalist brand, chose a palette of primarily black and hot pink ink with one robin’s egg card in the mix. She chose some of my favorite designs, so I’m hoping they fly off the shelves! Next time you’re headed “up North” along I-90, make a pit stop in Stevens Point to check out Assembly: You’ll be tempted by all her beautiful goods, but be sure to pick up a few cards!

A great screenprinting and clothing design studio out of LA, ava love channels her poetic leanings into a beautiful clothing collection. Some pieces are 100% handmade and some simply embellished with her images, but they’re all lovely!

Michael Phipps is an illustrator whose work has appeared on everything from book covers to posters, and Alternative Apparel tees in his etsy shop. I particularly love his “Tattoo” animal illustrations.

There’s underwear on your underwear! I love these funky little prints from Christy & Ronnie at Lucha Workshop. Their illustration style seems very intuitive and effortless, which I love because I’m always overthinking everything.

These lovely screenprinted pieces are made in Rhode Island by Stephanie of Stevester. She’s inspired by her natural surroundings and I love that she does everything from creating the original designs to making the screens to doing the actual printing. Her straightforward style reminds me of my own – love it!