I’m super excited to announce 622 Press goods are now available at The Waxwing in Milwaukee! I’ve been wanting to get into MKE for years now, but hadn’t found the right fit—until now! The Waxwing is just my style: an eclectic mix of local and international artists and makers curated into a one-stop shop for any occasion, including when you just need to treat yourself!

Owner Steph carries art and paper goods as well as clothing, housewares and more! She’s carrying my wood type “hello” cards in exclusive colors, along with a few of my favorite designs for any occasion! Stop by E. North Avenue to see them all! 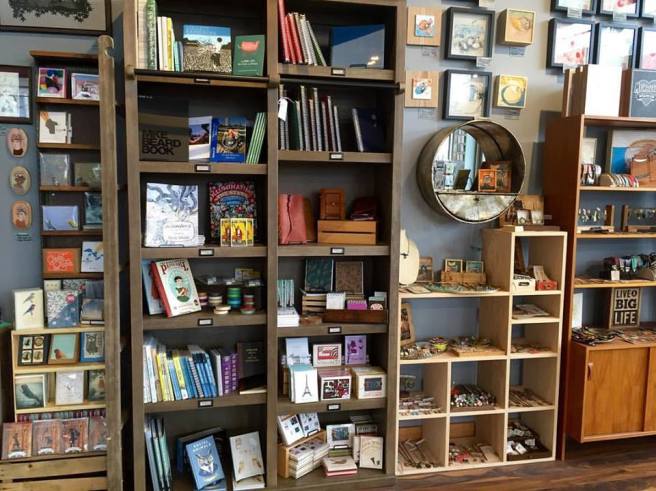 Ok, you guys, I fooled you. This really isn’t a travel guide per se… but since most of you readers are American, it’s really just a reminder of how great  having access to EVERYTHING YOU’D EVER WANT OR NEED really is.

I just returned from a long weekend in Atlanta, where my youngest sister lives. It was my first time off the island since January (my longest stretch yet!) and boy, could I tell.

We decided we would eat in the first night, since we’d be out and about the rest of the weekend. So, on the way home from the airport, we stopped at her local grocery store for provisions. You guys! Do you realize how amazing American grocery stores are? First of all, the produce department alone in her smallish neighborhood shop was nearly the size of the entire store closest to our house. The variety! I usually have to go to two different stores if I really want to check everything off my list (and even then, I haven’t been able to find sweet potatoes anywhere in months). Plus, you can pick up flowers, houseplants, specialty kitchen gadgets, any kind of booze or beer or wine you might desire… the list goes on.

And the best part was, nothing was rotten, wilted, or so far away from ripe it barely resembled the end product. I could have happily taken a bite from anything on display and it would be juicy and flavorful and perfect.

Second, the prices! I ended up picking up a few extra items simply because they were less than one-third of the prices they are here. I understand nearly everything in my grocery store has to be shipped here, but seriously. I spent the same amount on sandwich supplies the day we got back on island that my sister did for very fancy dinner ingredients.

The next day, I dropped my sister off at work so I could borrow her car. I spent the entire morning at Target! Dear readers, I support shopping local. I do it every chance I get—I’m always buying handmade gifts and supporting local makers. But when a giant, corporate one-stop-shop is not an option, simple errands become a rather large undertaking. The fact that I can get a couple cute tanks, work-out wear, makeup, razors, a new purse, SodaStream flavors, coffee and a mango smoothie (which is what I got), plus shoes, housewares, sporting goods, electronics, etc. all in one stop is just about the best thing ever.

And again with the prices. Clothing, like everything else here is a little pricey, but the real problem is the quality. A top that’s Target quality is marked at Bloomingdale’s prices… and there’s nothing you can do about it. There are really only 2 department stores and a handful of smaller shops here and they each have several outposts throughout the island.

And then, I got to stash my bags in the car and walk next door! I love my scooter, and it’s really the most convenient thing for Bermuda roads, but it’s such a luxury to be able to throw something in your back seat, lock your doors and know that no one’s going to nick it.

Lunchtime. I’ve been dreaming of this… pushing aside cravings for months… Qdoba. I actually had to settle for Chipotle since the only Qdoba in Atlanta is in the airport, but it still did the trick. (Also, America, you have TWO of essentially the exact same restaurant and they’re both thriving!) I know fast-casual is the latest buzzword in dining, but man, do I miss it. We’ve got three basic levels here: total crap fast food (It’s not even good! Knock-off KFC or greasy burgers from a truck.); bar food, which will still set you back around $20 a plate, plus you feel pressured to order at least one $7+ drink; or a sit-down restaurant with varying levels of fanciness (and price, but all expensive). Oh, and they do Mexican food TERRIBLY here. Don’t even try it. A couple bars have mastered nachos, but we all know that’s actually American.

So, burrito, chips and guacamole—check! I stopped at a mall. It was glorious! And then I did do a little shopping local, in well-merchandised stores with very high quality wares. They were organized, they were charming. They were all on the same street. I bought myself some letterpress stationery (of course!) and a gift for my mom, and just barely managed to resist buying a BUNCH of handmade jewelry.

That night we went out for barbeque (again, something they do very poorly in Bermuda, plus I don’t even want to know how much a restaurant would charge for that much meat!), then grabbed a few drinks at a rooftop bar closer to my sister’s house (and they had live music that was actually good!).

It was a fabulous weekend that reminded me how good we had it back in the old U.S.A. So my dear Americans, you may feel uncultured, corporatized (made-up word), and stuck in a dysfunctional political system, but remember how great things are too! Capitalism! Infrastructure! National parks! A melting pot of food and culture! Burritos!

Academia sometimes gets a bad rap from artsy types—after all, how can you teach creativity? However, sometimes a university environment is the perfect mix of a safe place for experimentation and just the right amount of challenge. Such was the case for Sarah Sherman of charm LA. Here’s the story of how she came up with her brilliant Sumba mixing bowls (which appeared in one of my gift guides last month), started her etsy shop and graduated—in her own words.

Tell us about your work—why do you create what you do?
Sumba was created for my senior thesis project at Otis College of Art and Design. I graduated last May. As someone that cooks frequently, I noticed that there was a disconnect between how kitchen tools are designed and how they are actually used. This came to my attention one day when I was cooking with my Aunt Sarah who has arthritis in her hands; she spilled the batter to a cake everywhere because it was hard for her to hold. I designed Sumba so it would do three essential tasks at once. Make it easier to pour, it incorporates a tilt to make it easer to mix, and has a lip to make it easier hold.

How did you learn your craft? Tell us about your process.
I learned about ceramics while at art school, so I have only been working in clay for about 3 years. Believe it or not, I had never touched clay in my live till my sophomore year in Product Design. I soon fell in love with the medium and took 3 semesters of ceramic classes with my teacher and my mentor, Joan Takayama-Ogawa. During this time I also became the ceramics departments TA and kiln tech.

In the classes, I learned new ceramics production techniques as wells as hand building and throwing techniques. I designed Sumba in a 3D program called Rhino. Then it was prototyped using a 3D printer, form that I made the molds, slipped casted and fired all the work at my school.

Where do you work? What type of environment stimulates your creativity?
Currently I have been creating my ceramics in my kitchen. I am in the process of converting my basement in to a proper ceramics studio. I don’t have any specific environment that stimulates my creativity, but I like to have a clean working enjoyment. As a ritual I always clean a space before I work. Other wise its hard to focus when there is visual clutter everywhere.

What is your greatest challenge?
My greatest challenge since graduating has been losing my community. Although I still see my friends from school I miss the environment at Otis. There is something special about being surrounded by people that are all creative.

What inspires you?
Other people inspire me, anybody that is masterful at what they do, not just artist or designers, but people that have passion and dedication. They can be found anywhere, from that mom making all of Thanksgiving from scratch, to those surfers on the beach that always seem to have a smile on there face.

Tell us about your etsy business. How did you discover etsy.com? Any beginner mistakes?
I started my etsy two months ago. I heard about it threw word of mouth. I would say that my beginner mistake was not having a pay pal account set up. I had lost a few sales because of that.

Etsy is not my full time job but I would like to make it that way. I am currently a working as design junior for small design firm based in LA. We hope to have a show coming up late march next year at the Pacific Design Center.